Can a System Fail When You Add a Shielding Metal Enclosure (Faraday Cage)?

Most people would add a metal shielding enclosure to reduce electromagnetic emissions from their electronic equipment. They would then expect the radiated emissions to go down so much so, that if the emissions were to rise, their immediate response might be “no, that’s not possible”. However, strange though it may seem, the answer is “yes, it is possible”. This result is totally counter intuitive to what you would expect. In fact, instances like this often lead people to think that EMI/EMC is difficult. But, there are many such situations possible when working in the field of EMI/EMC. Let’s look into the reasons as to how this particular phenomenon occurs. After reading this piece, you may find this component of EMI/EMC easier to understand than before!

First of all, typical design engineers often think only about their signals and corresponding circuits. They do not think about noise, that is, the unwanted electromagnetic energy. Even though they are equipped with the basic concepts of currents, voltages and fields, they do not commonly use these concepts in their daily designs. One such concept, that can make EMI/EMC easier to understand, is that the electrical energy (or signal) in any circuit, when sent from point A to point B within the circuit, is not travelling in the electrical conductor. Most of this energy actually exists in the space surrounding the conductor.

You would not see an equation for the energy within the conductor, or in terms of the resistance of the conductor. Equations for energy or power with regards to resistance, defines the amount of energy wasted and is given by the current squared multiplied by the resistance I2xR. Any equation regarding stored energy is determined by capacitor or inductor because the energy within a circuit is stored in the capacitors and inductors. So, the amount of energy stored in an inductor at any given time is given by the equation 1/2LI2. Similarly, the energy stored in a capacitor is given by 1/2CV2. The capacitance and inductance are related to the physical space around the conductor and not its resistance (or conductance). So really, the energy exists in the space surrounding the conductor and, depending on the frequency of the signal, some of this energy could radiate out or couple to other circuits. Therefore, the conductor that is supposed to carry the signal (energy) from any point A to point B could lose this energy to any conductor or circuit in the vicinity. This phenomenon is generally described as crosstalk (from one circuit to the other). Basically, that is electromagnetic noise because this energy is going where it is not needed.

In order to reduce the electromagnetic noise escaping the equipment, a design engineer may attempt to contain this energy within the system by enclosing the equipment in a metal enclosure or shield. In this situation the enclosure, sometimes referred to as a Faraday cage, contains the escaping energy within. However, not all enclosures are ideal Faraday Cages in the sense that they have imperfections.

Now, let’s look at the three weaknesses of the Faraday cage listed above one by one.

First, as seen in Figure 1 below, the openings allow the electromagnetic energy to leak out. Such openings take the form of (a) seams, which may not be visible or (b) slots. We have to minimize the leakage through these openings.

Second, the conductors going in or out may be signal cables, power cables, or simply ground conductors. These items can pick up the energy from inside the enclosure, carry it through the metal walls, and radiate it outside the enclosure. We also have to minimize the energy these cables and conductors are able to pick up from one side and radiate to the other side. This can be done by appropriate application of cable shielding and filtering.

Note: As we will discuss later, the energy absorbed by the metal is the main advantage of using a Faraday Cage because this electromagnetic energy converts to heat. 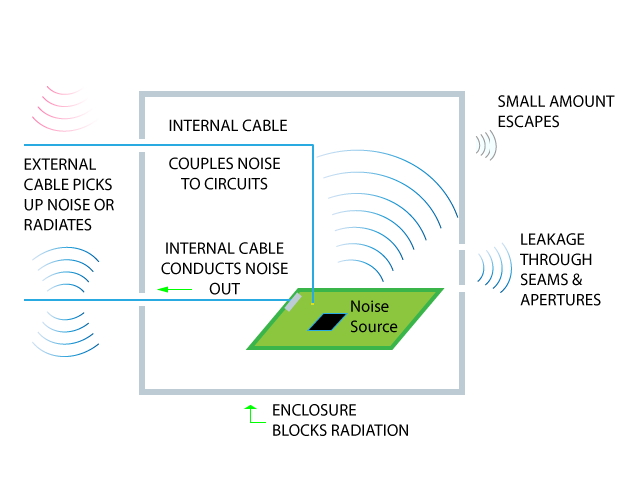 Figure 1: A Faraday Cage or enclosure shows how openings, cable conductors, and metal thickness may lead to energy leaking out.

To conclude, the real advantage of the Faraday cage, is that the enclosure acts as a sink for the electromagnetic energy by converting it into heat.

please contact us for information on how we can help you with your compliance needs.